The Drawn to Music Project

I wrote this text in 2015 as part of a booklet describing the project.  I wanted to share those thoughts.  I have worked on several new series since, but this first one is still close to my heart.  My studio is one flight down, no longer just steps away from the stage, but the muse is still strong, as are the beat, the guitars, and those powerful vocals!


Along the industrial waterfront of Fall River, under the span of the now blue Braga Bridge, which provides a delightful rhythm of its own, one finds a beautiful green park.  At the southern edge of Heritage Park, there is a carousel.  The former merry-go-round from the defunct local amusement park spins memories and new fantasies as it twirls to the music of the calliope at its center.  Just beyond, the Battleship Massachusetts, a museum to World War II, floats on the river as if guarding the city, protecting it from ignorance and naiveté.   On special days, the song of a single trumpet can be heard echoing off the steel beams and granite walls.  There is a train museum, a working pier with a ferry to Block Island, and a freighter that makes regular trips to Portugal, what many residents would call the old country.  The ship’s whistles and horns add to the song of the waterfront.  It is a diverse mixture of sound that blends like a natural symphony. 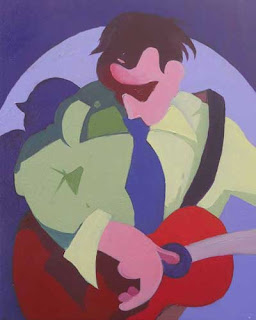 Across the road, near the train tracks, the ones that sustain traffic to and from the state pier and cargo ships, are old factory buildings built of brick or granite.  The first, and smaller, houses a pub that features live music and tasty food.  It is a popular spot on weekend nights.  I am inspired by the sounds that sneak out of the opened doors, and by the people, dressed for date night, making their way over the cobblestone street toward the front door.  That door is emblazoned with the words, “No Colors Allowed.”


Behind the pub building stands a three-story granite factory building.  It is here that I have spent eighteen months creating my artwork.  From January until August of 2014, I have focused on the music inside.  Walking in, I step up the forty-two stairs to the third floor.  The stone walls are pleasantly painted in neutral colors.  The area is clean, not much like the factory it once was, but like a place where art is created and performed.  On show nights, I arrive in early 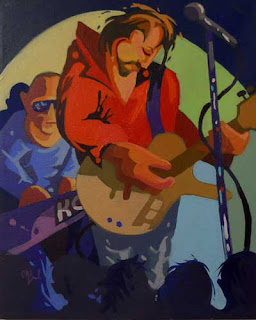 evening.  As I climb the stairs, the music of the sound check gets louder and clearer.  First the bass, the drums if there are any, guitars, and keys. I love the sound of the old Hammond as it kicks in, and finally the vocals.  I walk through the doorway and the sound is complete.  More times than not, a smile is drawn across my face.   I greet the staff and the volunteers of the Narrows Center for the Arts.  It is the home for up to ten studio artists in five working studios, and most importantly for the purposes of this project, home to hundreds of musical performances each year from which to be inspired and create ten oil paintings in eight months.  I am a slow and thoughtful painter.  This project required commitment and drive for me to complete.  This is my workplace and my muse.  The performers and the patrons who come into my studio before or after the shows are as much a part of this work as the paint, the brush, or my own hand.  The idea of this project was to show how performance art can influence visual art, and I am grateful for the experience. 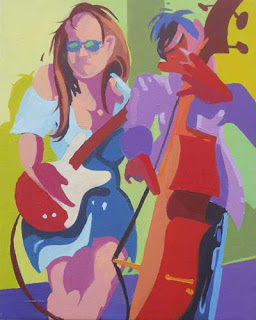 I had no idea about the range of musicians that would step though that doorway and onto the stage just a few dozen feet from my easel.  There were nights that it took extreme effort to remain an artist and not a fan boy.  When Carl Palmer, drummer for the progressive rock band Emerson, Lake, and Palmer came into the studio and began a wide-ranging discussion about art and painting, my heart beat like the sticks on his snare drum.  I have been a fan since I was sixteen or so.  There were others of note.  Dave Davies, of the Kinks, Dr. John, Leon Russell, The Zombies, Jefferson Airplane, Members of Little Feet, Live, and so 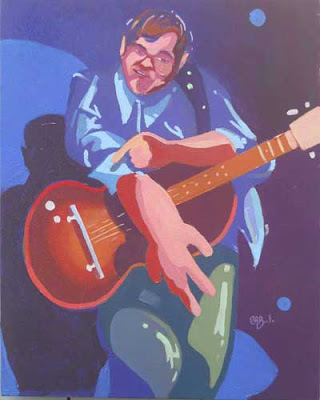 many more.  Some were up and coming performers, Seth Glier, Shamika Copeland, Samantha Fish, and many more.  On some level it is the last group that I found the deepest inspiration from.  The local folks who opened the shows, Mark T, Small, Rebecca Corriea, the many whose names slipped by in the shadows between the flood lights and the headliners.  Their names may have flitted by, but their impact remains.  I sat in the darkness of my studio with a dim lamp shedding a soft glow on the drawing table and drew with a soft pencil or a black marker and captured the gesture of the performance.  While I often found myself whistling and cheering with the audience for the headliners, (sorry Carl no sketches of you), it was the performers I did not know who allowed me to respond and create from their work.  They don’t even know how profoundly they influenced me, but they did.  As for the headliners, yes, they were important as well.  The sketches were cruder and less evolved, yet the impact of the songs in my head remained long after the echoes died out. 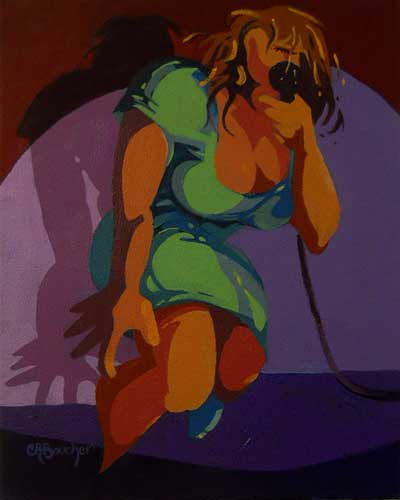 Ahh, the music.  It starts with folk and Americana, moves with a quick step to Rock and sometimes Jazz, and even a bit of Country.  There are solos and harmonies.  Sometimes the tunes are familiar and quite often they are new discoveries.  I love it when I discover something new.  Royal Southern Brotherhood came in with legendary family names and did not disappoint me with a group of songs that added to the legacies of at least two musical families.  I play the songs regularly.  Chuck Cannon, a man I had never 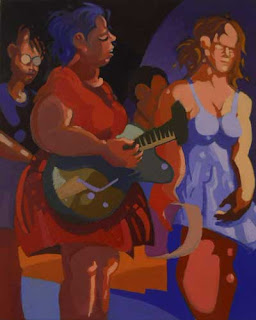 heard of, opened with a collection of songs that reminded me of Johnny Cash and so much more.  His deep haunting voice flowed over the rhythm and strum of his guitar.  Shamika Copeland is a powerhouse vocalist, reminding me of Etta James.  Her voice was like a great trumpet blast.


I love discovering new work and that’s my motivation with this series of paintings.  My intent is that they come across like a song heard for the first time.  It is no longer important who they were at the start.  What is important is how they are received and translated.  The colors vibrate like notes on a scale.  The values are like a bass drum, beating the time and full of guidance.  My strokes of paint, like improvised flares during a solo.  Like the music and performances that inspired this work, it is more important now that that I am finished.  Like the songs on an album, this collection now belongs to those who are moved by it.  The Drawn to Music Project will continue at a slower pace.  I don’t think I could ever let go of this particular muse.  For now, this album is complete. 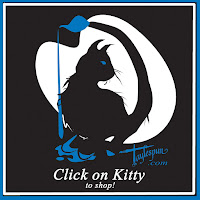 
Posted by Taylespun Studio at 3:04 PM