About 1 hour and 15 minutes north of Boston, along the rocky southern coast of Maine, there is a small seacoast town called Ogunquit.  It has the feel of a Cape Cod village, but with a twist of pace that makes it just a bit slower, calmer, and somewhat unique.  The area is filled with gift shops, small businesses and oh so many restaurants’, hotels, and a beautiful sandy beach. 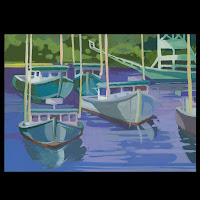 Along the rocky coastline, there is a walkway called The Marginal Way.  It winds along the coast between stunning beach side hotels, private homes, small nook like beaches tucked between tall, dark rock formations that seem to slide right into the ever-present rhythmic waves.  In the distance, dotted along the horizon, there is a mixture of sport craft, sailing craft and fishing boats.  Lobster boats make their way along the coastline picking dinner for the visitors along The Way, to enjoy.

Just a mile or two away from the center of town, a small safe haven called Perkins Coves wraps around the vessels moored for the day while they rest. 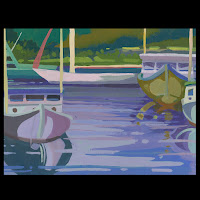 I was moved by the tranquility that blanketed the cove.  The sea reflecting those vessels, and the sky over them, took on a life and planted a seed in me that has inspired me to create and to express that sense of peace if feel every time I return.

AT REST, PERKINS COVE is a 12x48 inch oil on canvas 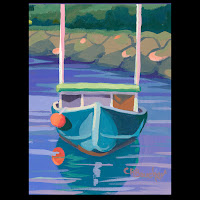 filled with the working boast as my title says, at rest.  But the title refers to me, and the feeling I get, sitting on bench alongside the harbor, at a restaurants, or walking with my wife through the crowds winding between it all.  We have sailed on the charter boats, ridden the trolley bus, and eaten at many of the local spots, highlighted by Prego and the Lobster Trap. 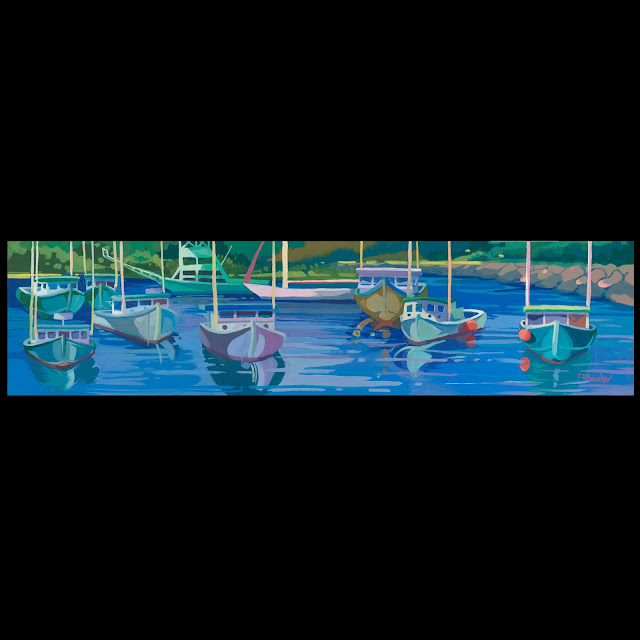 The food, the air, the scent of the sea all contribute to my introspective process, those early steps i take before I paint.  During stressful times in my life, I seek out calming place.  My wife and I explore together, we grow together and we feed the muse together, and in the bright light beside the ocean, and in Perkins Cove, we find ourselves at rest, then the creation begins.